Is Zaobian the best Digital Temtem?

Stat-wise, Zaobian is not the best Digital Temtem around. It does, however, have one of the best designs in the game and the coolest luma form next to Golzy. I also argue that it should have been one of the starters, replacing Houchic. Bias aside, Zaobian's versatility, high attack and stamina make a nice addition to the right team.

Zaobian's speed and low defensive bulk prevent it from being a staple on many competitive teams. However, it finds its stride in the various Tamer's Paradise challenges due to the coverage it has and the STAB bonus for every move it gets from its trait Attack <T>.

To fully capitalize on its diverse move pool, you will need to employ either egg techniques or a lot of breeding. The former being a very rare item drop from Wishing Wells, so its best to breed if you can. Alternatively, you could go to the Auction House a buy the techniques.

I recently did this to get the move Telekinetic Shrapnel on my luma Zaobian. It costed me around 56K Pansuns but it was worth it. Here is a list of Zaobian's Egg Moves.

Zaobian's moveset largely depends on your team's needs. The team I use for the Dojo rematches severely lacked coverage for Neutral and Melee Tems. As such, Zaobian filled that role with its Telekinetic Shrapnel.

Here is the moves set I run when facing the Cipanku and Arbury Dojo Masters.

When running this set I equipped Zaobian with a War Drum to boost his attack by 8%. Cyberclaw has high priority and with decent speed investment, it can help Zaobian strike faster than it normally would.

Electropunch knocks Nagaise (used in the Arbury Dojo) out with one hit, while Telekinetic Shrapnel helps deal with the Neutral type Tems that are used. Turbine deals with Nidrasil should you encounter him.

Zaobian has a boatload of moves to choose from. Among these are various stat boosting moves, these can be run to surprise your opponent who may be expecting the same Zaobian sets you see floating around on Discord and other places.

If you can pull off the two boosting moves without getting knocked out, you will have one beast of a robot on your side. Since the boosting moves are pretty stamina heavy, equipping a Sweatband may be preferable over a War Drum.

The TV spread maximizes Zaobian's Attack power and boosts its Stamina and HP. This is done to allow it maximum damage output, durability and reusability of its moves. The 2 attacking moves can be whatever your squad needs for coverage. This move set is also perfect for TemSafari since fast attackers with boosting moves rack up K.O.'s quickly. 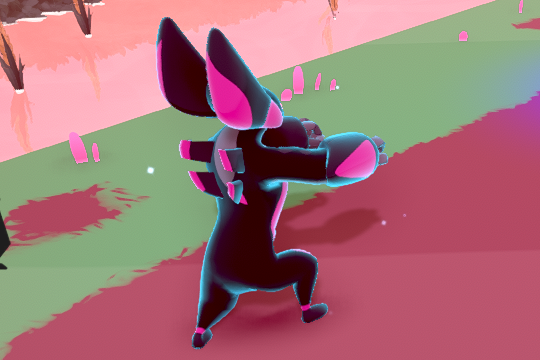 As the name suggests, this move set relies on techniques that Zaobian inherits from its parents. The only non-egg move is Laundry. This technique when used with an Electric partner gifts the user 10% of its maximum HP.

Recovering HP is vital for any Tem but especially important for slower ones like Zaobian.

This set aims to prevent Tems like Valash from boosting and wrecking your entire squad. Data Corruption is great for weakening walls that tend to run Heavy Armor like Mawmense. Wastewater is here for its poison tick and Turbine has great priority and power.

Overall, Zaobian is a fun Temtem to use for both competitive and in-game matches. Its super versatile and can help earn you tons of feathers to get the radars you need for your luma hunting efforts.