Is Hountrion good in Coromon?

Hountrion has a very cool design and awesome color scheme in its Potent form. Its perfect form is far inferior, in my opinion. Nonetheless, its a speedy attacker with a great movepool, particularly for those of us who try to drain SP from opposing Coromon fast.

Hountrion does have one glaring flaw, its physical defense. Its very frail on the physical side of things. Its ability, Menacing can helped patched this a bit upon switch in though.

The best Trait for Huntrion is Menacing. This trait lowers the physical attack of an opposing Coromon whenever Huntrion comes into battle.

Its other traits, Coward and Brave, are a little too situational for my liking. Brave prevents Houtrion from getting Cursed while Coward increase its defense 2 stages whenever it is hit with a critical hit.

For those wishing to enhace this trait, here is what you will get.

Hountrion is already frail as it is so dropping the its defensive capabilities further would allow nearly every competitive Coromn to one-shot.

I use Hountrion as an SP Burner as well as a Mixed Sweeper. It has high enough physical and special attack to severely damage opponents while its speed stat allows it to set up Electro Mines. Electro Mines is an entry hazard that reduces the SP of any non-electric Coromon by 20% and restores 20% for Electric types upon switch in.

This set allows you to attack from both sides while laying a potentially devastating entry hazard on your opponent's side of the field. Other than being frozen, I can't think of anything more annoying that running out of SP. This next set focuses solely on exhausting your opponents.

If you can keep Hountrion from being knocked out, this set will destroy your opponent's SP quickly. Spark Disc is a move that can potentially cost Hountrion 0 SP, if it manages to hit 3 times.

Ball of Darkness if there to make sure you are not totally walled by Sand and other Electric types. Feel free to swap this coverage move out for whatever your squad is lacking in terms of coverage.

For both of the mixed sets running 60 points in your speed with 30 in attack and special attack will ensure Hountrion is fast enough launch Electro Mines while having enough attack power to smash opponents.

After dumping about 40% of your points into speed, allocate 40% to your special attack and the remaining to your HP. If you want to go with a mixed set, just split the 40% between the attacking stats. 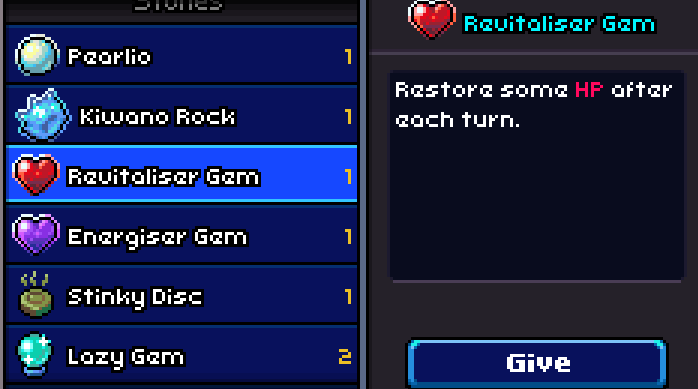 The Revitaliser Gem functions like leftovers in Pokemon in that it provides the holder with extra HP at end of each turn. Another nice option for Hountrion is Energiser Gem since it helps reduce the SP cost for all of Hountrion's moves by one point.